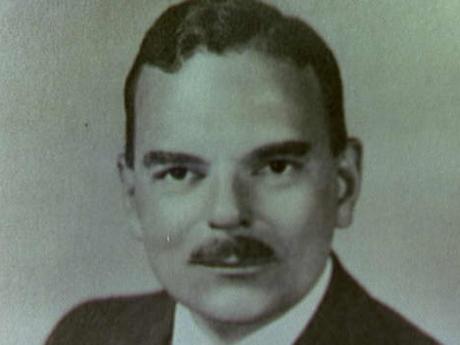 Pictures related to Thomas E. Dewey, his life, and his work.

Thomas Edmund Dewey was born in Owosso, Michigan on March 24, 1902, the son of Martin and Annie (Thomas) Dewey.  His father was the publisher of a local newspaper, the Owosso Times.  He was born above his grandfather's store at 323 W. Main Street.   His boyhood home was located at 421 W. Oliver Street.

Dewey held a number of jobs during his early years.  At the age of 13, he organized his own news agency and hired nine other boys to sell newspapers and magazines  door to door.  Other jobs included working at the sugar beet factory in Owosso,  at a local drugstore, and a local farm.

He graduated from Central High School in Owosso in 1919 as president of his class.  The yearbook also listed him as editor-in-chief of the Spic (the high school yearbook) and as participating  in debating, drama, the Cadet Corps, band, and other activities.  He was a member of Christ Episcopal Church where he also sang in the choir.

Dewey received his Bachelor's Degree from the University of Michigan in 1923 and his law degree from Columbia University in 1925.  The following year he was admitted to the New York bar.  From 1931 to 1933, he served as chief assistant to the U.S. attorney for the southern district of New York, and from 1933 to 1935, as special assistant to U.S. Attorney General Homer Stille Cummings.

He was appointed special prosecutor investigating organized crime in New York in 1935.  In 1937, he was elected as county district attorney and was known as the "Rackets Buster" for obtaining 72 convictions out of 73 prosecutions during the previous two years.

The following year, 1938, he lost the election for Governor of New York.  Two years later, he made an unsuccessful bid for the Republican presidential nomination.  However, in 1942, he won the New York gubernatorial race by an impressive margin and was reelected in 1946 and 1950.

In 1944, Dewey won the Republican nomination for president, but lost the election to the popular Franklin D. Roosevelt.  Four years later, he ran again against incumbent President Harry S. Truman.  When Dewey returned to Owosso during his 1948 campaign an estimated 27,000 people lined the streets for a parade and then filled Willman Field to hear him speak.  He was expected to win the election, but a lackluster campaign, overconfidence, and the country's prosperity gave Truman an upset victory.  However, the Chicago Daily Tribune's headline, "Dewey Defeats Truman", gave him a place in American political folklore.

In 1952, Dewey helped General Dwight D. Eisenhower and Senator Richard M. Nixon win the Republican nomination.  At the end of his third term as governor, Dewey retired from active politics and returned to a private law practice in New York City.

After the death of his mother, Dewey returned to Owosso several times.  On December 9, 1962, he was the main speaker at the dedication of the new high school.  His last visit was in May 1966 when he spent a day with a cousin.

In 1928, Dewey married Francis Ellen Hutt; they had met at their singing teacher's studio.  They had two sons--Thomas Edmund, Jr. and John Martin.

Dewey authored several books including Journey to the Far Pacific (about his travels in Asia in 1951) and Thomas E. Dewey on the Two-Party System (a collection of lectures delivered at Princeton University in 1950).

Dewey died at the age of 68 on March 16, 1971 from a heart attack at Bal Harbor, Florida.  Burial took place at Pawling Cemetery in Pawling, New York.