One of Owosso’s most famous residents was James Oliver Curwood (1878-1927), a prolific writer, filmmaker, and conservationist. His writing studio, Curwood Castle, was built in 1922 and overlooks the Shiawassee River. This historic building is in the U.S. National Register of Historic Places. 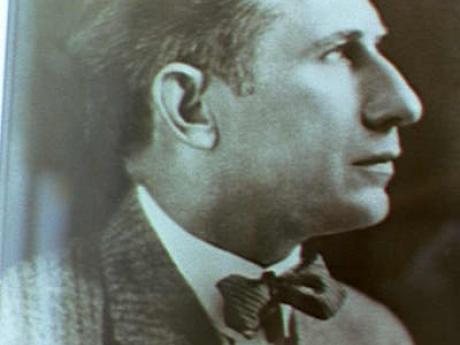 One of Owosso’s most famous residents.

James Oliver Curwood was born in Owosso, Michigan on June 12, 1878, the son of James Moran Curwood and Abigail (Griffen) Curwood. His father was a cobbler and operated a shop in Westown until Curwood was six years old.

When his business failed, the family moved to a farm in Erie County, Ohio. James' job on the farm was to pick up stones. Later, he remembered this time as helping to build character. It was also here that he began to write stories at the age of nine. When James was thirteen, the family returned to Owosso.

Curwood attended Owosso's Central High School until he was in the tenth grade. He was expelled at that time, possibly for enjoying the outdoors more than the classroom. However, in spite of never completing high school, he passed the entrance exam and enrolled in the University of Michigan's English department to study journalism in 1898. Two years later, he quit in order to become a reporter for the Detroit News-Tribune. Here, he was paid $8 per week to cover funerals; but six months later he was fired when he incorrectly reported a name in a story about a peeping Tom.

Curwood went on to work for a pharmaceutical manufacturer for $50 per month until 1902 when he was rehired by the Detroit News-Tribune for $18 per week. He continued there until 1907 when he left the assistant editor's position to devote more time to his writing.

Some of Curwood's first short stories were published while he was a teen, but he was not paid for these works. His first story to be sold was "Across the Range" for $5 to Gray Goose.  He was to have many more stories and more than 30 books published during his lifetime. River's End was the first book to sell more than 100,000 copies in its first edition. The critics considered his stories with right and wrong clearly defined to be melodramatic, but they were popular enough to be translated in foreign languages and made into movies. Curwood was to say, "Nature is my religion and my desire, my ambition, the great goal I wish to achieve, to take my readers with me into the heart of this nature."

In 1909, Curwood took his first trip into the Canadian Northwest. For the next 18 years, he would spend up to six months of each year in the wilderness, exploring, writing, and building log cabins. He wrote in the woods, under a tree in Owosso's Harmon-Partridge Park, in his log cabins (including one built along the Ausable River near Roscommon which was eventually built into a lodge), at home, and at his studio, which resembles a small castle.

Curwood had a replica of Norman chateau built along the banks of the Shiawassee River near his home in Owosso in 1922 and 1923. The exterior is made of yellow stucco containing fieldstones he chose himself; the roof is slate with copper trim. It does not contain any eating or sleeping areas. He used the great room to entertain guests, including movie producers, and the largest turret as his writing studio. Upon his death, it was willed to the City of Owosso. During World War II, Curwood Castle was used as a youth center; the Owosso Board of Education had its offices there until 1962; and since November 1970, it has been used as museum to house Curwood memorabilia.

In 1900, Curwood married Cora Leon Johnson. They had two children--Carlotta and Viola before they divorced eight years later. In September 1909, he married Ethel Greenwood and they had a son, James, Jr. Cora was given custody of their two daughters, although Carlotta lived in Owosso with her father.

Curwood was an avid hunter until about ten years before his death. While on a hunting trip in the Rockies, he saw a large bear he called Thor. He tried to shoot him three times in three weeks. One day as Thor approached him, he slipped and fell, breaking his gun. The bear reared up before walking away. Curwood turned from hunting for trophies to championing the cause of wild things.

His philosophy was to lead to his active campaigning for the preservation of Michigan's natural resources. He wanted to limit or even close hunting seasons, including the season for spikehorn deer. He was interested in stocking streams and game preserves, as well as reforestation. On January 1, 1927, he was appointed to the Michigan Conservation Commission. He was also instrumental in planning and building the Shiawassee Conservation Club. Unfortunately, after his death, most of the measures he had fought for were revoked.

Curwood had planned to live to be 100 by eating little meat, drinking no coffee, tea, or liquor, and exercising regularly. Instead, he died at the age of 49 on August 13, 1927 at his home. He is buried in Oak Hill Cemetery in Owosso.

Green Timber, which was published after his death, was completed by his secretary Dorothea A. Bryant. Originally, it was known as Whip-Poor-Will or A Poet--And a Sinner.

Titles You Can Find at SDL Owosso

*Thanks to Judy Eldridge and Tom Trusky for sharing their knowledge with the library. Items marked with an asterisk include their invaluable insights.