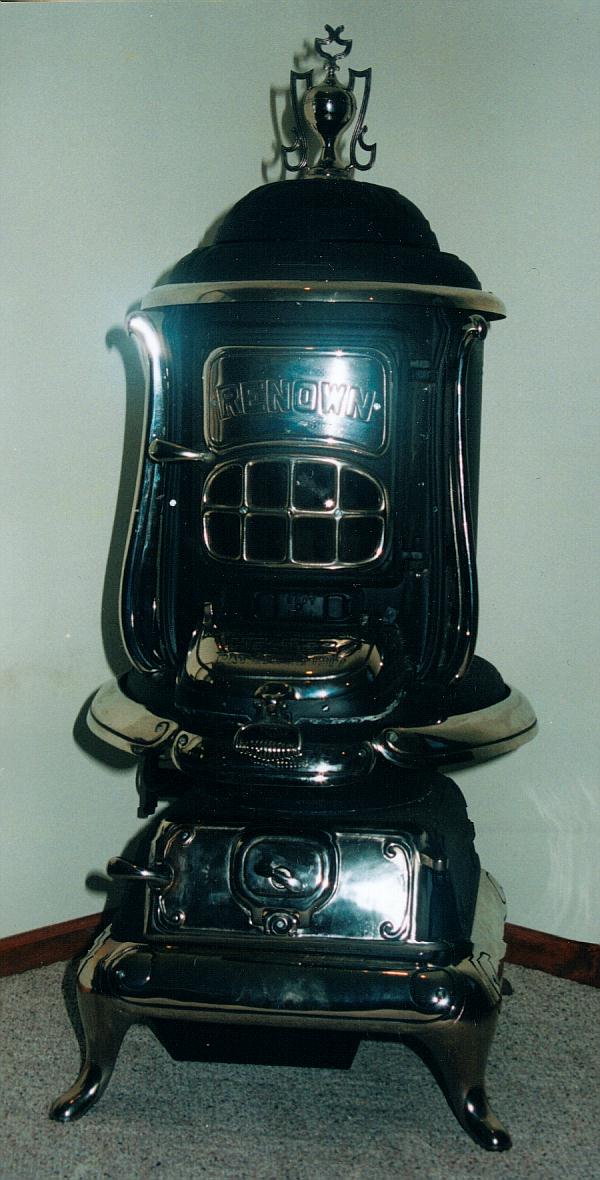 Photo courtesy of Twin Peak Homes, owner and restorer of above stove.

The Renown Stove Company also made some cast iron animals. Alligators such as the one shown below were common. 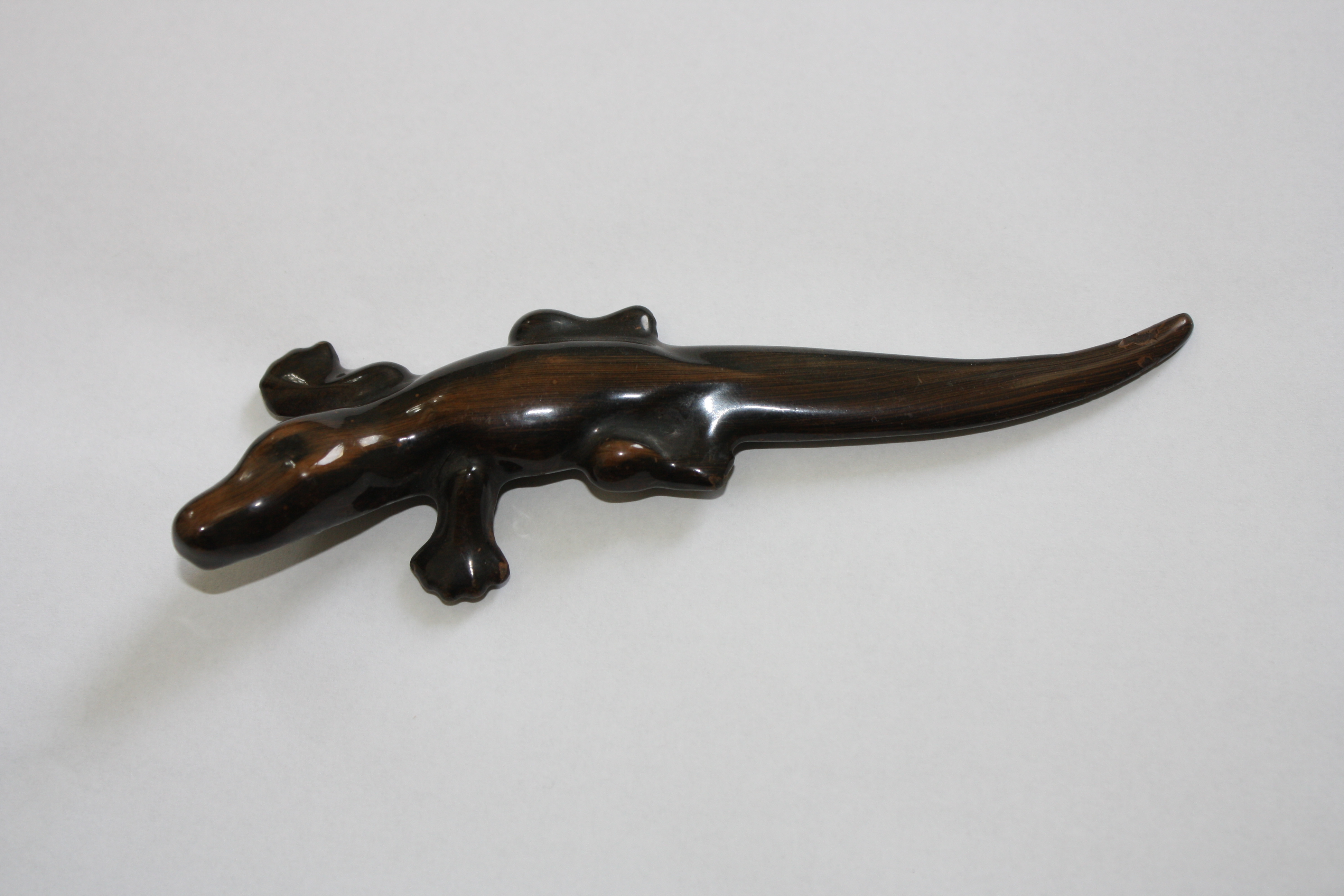 Three years after their founding, the management of the Independent Stove Company decided to move to Owosso.  The city offered them approximately three acres of land along the Michigan Central Railroad tracks in return for spending $250,000 in payroll over a five year period.

In October 1908, the first workmen arrived.  Machinery, parts, and more workmen arrived in a few days, and, within two weeks, the first stove was completed.  The first Renown dealer in Owosso was F. W. Pearce, whose store was located on the northeast corner of Main and Washington Streets.

A two story office and assembly building and a foundry were erected in 1908-1909 as operations began in Owosso.  Additions were added to the foundry in 1913-14 and 1917-1920, as well as a four story building at the same time.  Following World War II, the plant was modernized, but no additional floor space was created.

The line of stoves was gradually expanded to include steel ranges, furnaces, oak heaters, and an underfeed heater which generated less smoke than the earlier models in which fuel was added from the top.  At first, the steel ranges were primarily made from iron castings with steel parts used as decoration.  Gradually, as advances were made in design, steel was used in some of the functional parts which were not exposed to the heat generated in the firebox.  Later, porcelain enamel was used as an exterior coating.  At first, the enamel was applied by other manufacturers, but in 1930, a porcelain enamel department with all the necessary equipment was installed in Owosso.

Prior to and during the early years of the Depression, the company began reporting losses rather than profits.  They remained in business as the First National Bank of Detroit remained willing to extend their loans as they were guaranteed by A. M. Bentley, a wealthy Owosso industrialist.  However, by 1932, it became apparent that something needed to be done.

During the 1920's, the demand for cooking and heating devices which burned wood or coal also diminished.  While they were still being used in rural areas, people living in town were increasingly relying on the use of gas and central heating systems.  The Independent Stove Company tried to get into the gas range business, but change over costs were prohibitive.

Prior to this, Robinson left the company after a disagreement with Waddell and Ellis.  Robinson felt that the company should develop unique features not available from other manufacturers, providing the market with better products which could be sold at higher prices.  On the other hand, Waddell and Ellis wanted to produce products which could be sold at the lowest possible prices.  Ellis became president of the company after Robinson's departure.

In 1932, the board of directors decided to have the company's situation studied by Bernard Nagelvoort, a 1926 graduate of the University of Michigan's  Graduate School of Business Administration.  Along with Millard Pryor, he spent some time in the plant, talked to others in the stove industry and finance, and, finally, prepared a report with his findings.  Eventually, an agreement was reached to allow these two to take over the management of the company.

In September 1932, Pryor and Nagelvoort arrived in Owosso to begin their new responsibilities.  Modernization of the plant, adoption of a realistic pricing policy, and financial restructuring were priorities.

The trade name of Renown had been used on most products for many years.  In December 1933, the name of the company was changed to the Renown Stove Company.  Stoves continued to be their main product until 1942.  Production then ceased during World War II, but resumed again in 1944.  Stoves continued to be made until 1949.  After 1932, the emphasis changed from wood and coal burning stoves to oil burning ranges and heaters as well as combination ranges, which could burn either wood or coal in one phase of their operation and gas or oil in the second phase.

In October 1938, a week long celebration was held in honor of the Independent Stove Company's 30th anniversary.  Factory tours were given, refreshments were served, and souvenir paperweights in the shape of dogs were distributed. (Paperweights in the shapes of additional animals--such as elephants and alligators--are also known to have been produced during the company's history, but no definite dates have been determined.)

On  Wednesday, December 19, 1945, tragedy nearly struck the stove company.  A section of the wall on the two story building collapsed from the roof to the first floor at 3:45 p.m.  Castings stored on the second floor dropped and completely buried the first floor stove assembly line number 1.  Fortunately, all of the men were able to flee the area, and there were no serious injuries.  In about two months, full operations were resumed.

In 1949, stove production ceased; the last shipments were made in early 1950.  Manufacturing rights, patterns, dies, and the remaining inventory of parts were sold to Prizer Painter Stove Company in Pennsylvania.  During the previous 45 years, the Independent Stove Company and the Renown Stove Company had produced more than 300,000 stoves and heaters.  In February 1952, the word "stove" was dropped from the company name which became known as the Renown Corporation.  They continued to manufacture salvage gear used by the U. S. Navy, magnesium castings for use in aircraft, spark plug cleaners, steel clothes lockers for the military, and gasoline dispensers.

In early February 1950, Renown's assets were sold to the Toledo Commutator Company with factories in Toledo, Ohio and Hillsdale, Michigan.  In 1953, the machinery was auctioned off, and, in 1954, the commutator business moved to a new home on South Chestnut Street in Owosso.  The land and buildings were sold in December 1956.