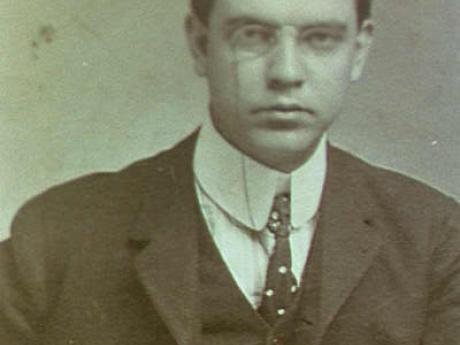 Frederick Carl Frieseke was born in Owosso, Michigan on April 7, 1874 to Herman Carl and Eva (Graham) Frieseke.  His father manufactured bricks, including those used to build Frieseke's boyhood home.  Following his mother's death when Frederick was six years old, he spent some time living with his aunt and uncle, Mr. & Mrs. C. C. Duff, and working in his uncle's grocery store.

His aunt remembered him as being different from other boys.  He was more interested in music, art, and reading than athletics and the outdoors.  He would even draw in the margins or on the end pages of his school books.  He frequently sang with his aunt and uncle, but his grandmother, Mrs. Valetta Gould Graham, liked to paint and encouraged him to develop his artistic talents.

After graduating from Owosso High School in 1893, Frieseke went on to study art at the Chicago Art Institute for a year.  In 1895, he moved to New York to study at the Art Students' League, and in 1898, he moved to Paris where he enrolled at the Academie Julian and was influenced by James A. M. Whistler.

During these first few years in Paris, Frieseke spent part of his time doing work commissioned by Rodman Wanamaker.  He was also commissioned to paint murals for Wanamaker's store in New York and the Shelbourne Hotel in Atlantic City, New Jersey.  Wanamaker's interest is credited with providing Frieseke freedom from pursuits other than painting.

In 1906, Frieseke rented  the house next door to Claude Monet in Giverny, France for the summer.  He and his wife, Sarah Ann O'Bryan, whom he married in 1905, and later their daughter, Frances, spent their summers there until about 1919.  Many of Frieseke's paintings were set in this house or its garden.

Frieseke was increasingly dissatisfied with the formal art forms of his time.  In an interview with Clara T. MacChesney, probably in 1912, he considered himself an impressionist and said, "No artist in [the impressionist school has influenced me except, perhaps, Renoir."  His principal concerns were the varied effects of sunlight.  As he said himself, "It is sunshine, flowers in sunshine; girls in sunshine; the nude in sunshine, which I have been principally interested in.  If I could only reproduce it exactly as I see it I would be satisfied."  His subjects were often women seated in sunny gardens or boudoirs.  Occasionally, he also painted landscapes, still-lifes, and nudes.  As he grew older, he painted more of his own life, including his wife and daughter.

Frieseke's paintings won many honors beginning with a silver medal at the St. Louis Exposition in 1904; he also won the gold medal in Munich that same year.  The climax in a succession of honors was reached in 1915 when he won the grand prize at the Panama-Pacific Exposition in San Francisco.  In 1920, his painting Torn Lingerie won two gold medals and the popular prize at the Chicago Art Institute, based upon the opinions of both other artists and the general public.

After the first World War, Frieseke purchased a country home in Normandy.  He preferred living in France to the United States because of the freedom it offered him.  As his grandson Nicholas Kilmer noted, the Friesekes lived in Normandy for two reasons--first the trout fishing was good and second Frieseke was not required "to make a noise like an artist".    Frieseke himself said, "I stay on here because I am more free and there are not the Puritanical restrictions which prevail in America . . . .I can paint a nude in my garden or down by the fish pond and not be run out of town." Frieseke, however, continued to consider himself an American and made occasional trips back to the States.

In 1904, the French government purchased his Before the Glass, and it was hung in the Luxembourg Gallery.  In 1912, after his first solo exhibition, Wanamaker gave Frieseke's La Toilette to the Metropolitan Museum in New York.  Many other museums were also to acquire his paintings including The Art Institute of Chicago, The Minneapolis Institute of Arts, The Detroit Institute of Arts, the Corcoran Gallery of Art in Washington, D.C., and the Modern Gallery in Venice, Italy.  Two of his paintings  have hung in the Shiawassee District Library--Lady With the Sunshade, which was a gift to the city of Owosso in 1926, and Holland 1898.  A number of other museums, private individuals, and the Shiawassee Arts Council also have some of his paintings.

After World War I, there was a slow but steady decline in Frieseke's popularity.  In spite of continuing awards and the acquisition of his paintings by a number of museums, diminishing sales and negative reviews reflected a change in tastes.  Critics saw his work as outmoded and overly conservative and Frieseke as a painter of pretty women.  It was also during this time that the mood of his paintings became more contemplative, his colors more somber, and his compositions more static.  His style was becoming less  French Impressionist and moving more towards realism.

Frieseke said that "I never compose a picture before Nature, but I paint what I see that is interesting, and which appeals to me at that moment.  I put down whatever I see before me.  I avoid being conventional as much as possible, for most picture making is conventional.  I never change the drawing of a tree, or leave out a bed of flowers.  I may not see them, if they do not add to the beauty of the whole." However,  his family remembered his wife editing his paintings by removing things from the top of bureaus and tables which she did not want seen.

Frieseke died August 24, 1939 in Normandy and was buried at Mesnil-sur-Blangy in France.

Ironically, it is Frieseke's nudes which were never popular with the American public that are considered to be his best works.  His paintings have also regained some of their original popularity and frequently command high prices at auction.

Lady with the Sunshade was presented to the City of Owosso (Michigan) by the artist.  The formal presentation was made at the Owosso Public Library on February 9, 1926 with the mayor accepting the gift.

The idea of presenting a painting to his hometown was made to Frieseke by Mrs. Fred Woodard while visiting his home in France the previous summer.  The painting was donated in memory of his grandmother, Mrs. Valetta Gould Graham, and, as is typical of Frieseke's work, depicts a woman seated in a garden.

This painting currently hangs at the Shiawassee Arts Center.

This watercolor was originally given to Lee Todd, who was a second cousin to the artist.  About 1955-1960, it was acquired by the city and has been displayed at the library since sometime prior to 1970.

Frieseke used watercolors when traveling, and this is one of his earlier works.  At least one other known work, Dutch Landscape,  is mentioned in Artists of Michigan From the Nineteenth Century (published by the Muskegon Museum of Art in 1987) and also dates to 1898.  Frieseke's later works were not landscapes, but studies in light and color often featuring women.